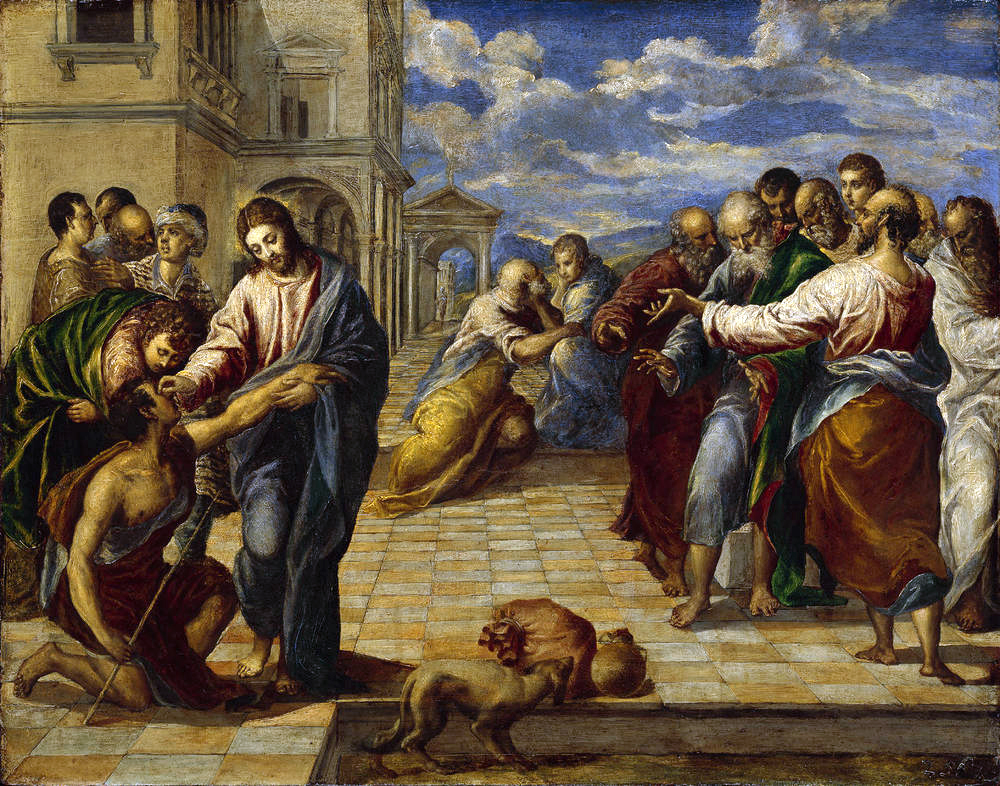 14For a long time I have held my peace;
I have kept still and restrained myself;
now I will cry out like a woman in labor;
I will gasp and pant.
15I will lay waste mountains and hills,
and dry up all their vegetation;
I will turn the rivers into islands,
and dry up the pools.
16And I will lead the blind
in a way that they do not know,
in paths that they have not known
I will guide them.
I will turn the darkness before them into light,
the rough places into level ground.
These are the things I do,
and I do not forsake them.
17They are turned back and utterly put to shame,
who trust in carved idols,
who say to metal images,
“You are our gods.”

18Hear, you deaf,
and look, you blind, that you may see!
19Who is blind but my servant,
or deaf as my messenger whom I send?
Who is blind as my dedicated one,
or blind as the servant of the Lord?
20He sees many things, but does not observe them;
his ears are open, but he does not hear.
21The Lord was pleased, for his righteousness’ sake,
to magnify his law and make it glorious.

1With my voice I cry out to the Lord;
with my voice I plead for mercy to the Lord.
2I pour out my complaint before him;
I tell my trouble before him.
3When my spirit faints within me,
you know my way!
In the path where I walk
they have hidden a trap for me.
4Look to the right and see:
there is none who takes notice of me;
no refuge remains to me;
no one cares for my soul.
5I cry to you, O Lord;
I say, “You are my refuge,
my portion in the land of the living.”
6Attend to my cry,
for I am brought very low!
Deliver me from my persecutors,
for they are too strong for me!
7Bring me out of prison,
that I may give thanks to your name!
The righteous will surround me,
for you will deal bountifully with me.

8For at one time you were darkness, but now you are light in the Lord. Walk as children of light 9(for the fruit of light is found in all that is good and right and true), 10and try to discern what is pleasing to the Lord. 11Take no part in the unfruitful works of darkness, but instead expose them. 12For it is shameful even to speak of the things that they do in secret. 13But when anything is exposed by the light, it becomes visible, 14for anything that becomes visible is light. Therefore it says,

“Awake, O sleeper,
and arise from the dead,
and Christ will shine on you.”

1As [Jesus] passed by, he saw a man blind from birth. 2And his disciples asked him, “Rabbi, who sinned, this man or his parents, that he was born blind?” 3Jesus answered, “It was not that this man sinned, or his parents, but that the works of God might be displayed in him. 4We must work the works of him who sent me while it is day; night is coming, when no one can work. 5As long as I am in the world, I am the light of the world.” 6Having said these things, he spat on the ground and made mud with the saliva. Then he anointed the man’s eyes with the mud 7and said to him, “Go, wash in the pool of Siloam” (which means Sent). So he went and washed and came back seeing.

8The neighbors and those who had seen him before as a beggar were saying, “Is this not the man who used to sit and beg?” 9Some said, “It is he.” Others said, “No, but he is like him.” He kept saying, “I am the man.” 10So they said to him, “Then how were your eyes opened?” 11He answered, “The man called Jesus made mud and anointed my eyes and said to me, ‘Go to Siloam and wash.’ So I went and washed and received my sight.” 12They said to him, “Where is he?” He said, “I do not know.”

13They brought to the Pharisees the man who had formerly been blind. 14Now it was a Sabbath day when Jesus made the mud and opened his eyes. 15So the Pharisees again asked him how he had received his sight. And he said to them, “He put mud on my eyes, and I washed, and I see.” 16Some of the Pharisees said, “This man is not from God, for he does not keep the Sabbath.” But others said, “How can a man who is a sinner do such signs?” And there was a division among them. 17So they said again to the blind man, “What do you say about him, since he has opened your eyes?” He said, “He is a prophet.”

18The Jews did not believe that he had been blind and had received his sight, until they called the parents of the man who had received his sight 19and asked them, “Is this your son, who you say was born blind? How then does he now see?” 20His parents answered, “We know that this is our son and that he was born blind. 21But how he now sees we do not know, nor do we know who opened his eyes. Ask him; he is of age. He will speak for himself.” 22(His parents said these things because they feared the Jews, for the Jews had already agreed that if anyone should confess Jesus to be Christ, he was to be put out of the synagogue.) 23Therefore his parents said, “He is of age; ask him.”

24So for the second time they called the man who had been blind and said to him, “Give glory to God. We know that this man is a sinner.” 25He answered, “Whether he is a sinner I do not know. One thing I do know, that though I was blind, now I see.” 26They said to him, “What did he do to you? How did he open your eyes?” 27He answered them, “I have told you already, and you would not listen. Why do you want to hear it again? Do you also want to become his disciples?” 28And they reviled him, saying, “You are his disciple, but we are disciples of Moses. 29We know that God has spoken to Moses, but as for this man, we do not know where he comes from.” 30The man answered, “Why, this is an amazing thing! You do not know where he comes from, and yet he opened my eyes. 31We know that God does not listen to sinners, but if anyone is a worshiper of God and does his will, God listens to him. 32Never since the world began has it been heard that anyone opened the eyes of a man born blind. 33If this man were not from God, he could do nothing.” 34They answered him, “You were born in utter sin, and would you teach us?” And they cast him out.

35Jesus heard that they had cast him out, and having found him he said, “Do you believe in the Son of Man?” 36He answered, “And who is he, sir, that I may believe in him?” 37Jesus said to him, “You have seen him, and it is he who is speaking to you.” 38He said, “Lord, I believe,” and he worshiped him. 39Jesus said, “For judgment I came into this world, that those who do not see may see, and those who see may become blind.” 40Some of the Pharisees near him heard these things, and said to him, “Are we also blind?” 41Jesus said to them, “If you were blind, you would have no guilt; but now that you say, ‘We see,’ your guilt remains.”

Almighty God, our heavenly Father, Your mercies are new every morning; and though we deserve only punishment, You receive us as Your children and provide for all our needs of body and soul. Grant that we may heartily acknowledge Your merciful goodness, give thanks for all Your benefits, and serve You in willing obedience; through Jesus Christ, Your Son, our Lord, who lives and reigns with You and the Holy Spirit, one God, now and forever.